skip to main | skip to sidebar

I have moved to another blog. I wanted to get back into reviews and giveaways. So integrated the two.
It is www.adventuresinmommyland.com

On Monday Kayla received Vincrystine and Methotrexate for her day 57 dose. That means that we have one more road map of hard chemo left. Then she will go into maintenance. Which is where she will only have to go to the Dr. office once a month and take a chemo pill everyday for 1 1/2 years. We might end up going to the doctor more than a few times in the beginning because they have to make sure that the pill is the right dose. They don't want to give her too much, or too little. He also said that her hair is going to fall out again. :::sigh::: This is the longest that it has been and she had been really excited about it. I broke the news to her and she seemed pretty ok with it. By now she is used to crappy things happening to her body. She has been so brave throughout the whole thing and I get my strength from her.

Jimmy got a PET scan and a CAT scan on Wednesday. They had to do the scans before starting radiation just to make sure that nothing has grown. I have to say that I am quite nervous and he is terrified. I have noticed him acting mad and upset and I asked him if he is scared of the results. Let's just say that he is preparing himself for the worst, eventhough there has been no indication that it has grown or come back. I think he just wants to be mentally ready for whatever the results say.

This past week has been really trying on me. I don't know which way is up. I am trying to be strong for Kayla and Jimmy but I don't have anybody being strong for me. They all put up a great front but for some reason I don't feel any better. And it's not like I have anybody to talk to that can relate. ugh....pity party for one please.
Posted by Sandra at 8:27 AM 3 comments:

Pumpkin Patch and a Dr. visit

On Sunday Jimmy, the kids and I went to the pumpkin patch. We didn't stay long because it was windy and there was hay blowing everywhere. The kids played a few games and took a picture with the scarecrow. They picked out pumpkins and got some candy.
Yesterday Kayla had a chemo appt. Her ANC was 1215 which surprised me. I thought for sure that it was going to be low. She got her Vincrystine and Methotrexate thourough her port. Then we went over to the big hospital and she got her spinal tap. She reciewved methotrexate in her spine as well. Right before we were going to leave Kayla decided that she wanted chips so I told Jimmy I would go down and get them and meet him at the elevators. I got the chips and waited. When the doors opened I saw Kayla and she was mad. Jimmy wanted to carry her because she was still loopy from the medication. She did not want Jimmy to carry her and wailed her head off. With promises of a Happy Meal she calmed down. All in all it was almost a 12 hour day. We were so pooped.
Here are some pictures from the pumpkin patch: 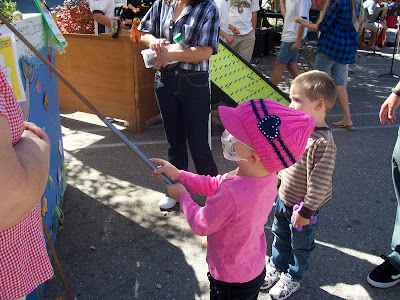 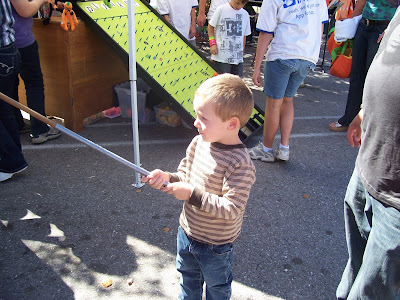 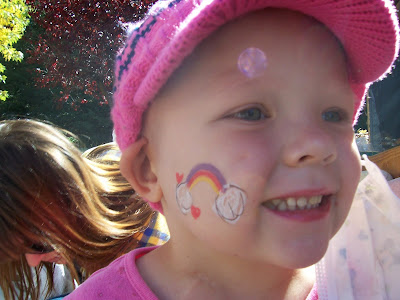 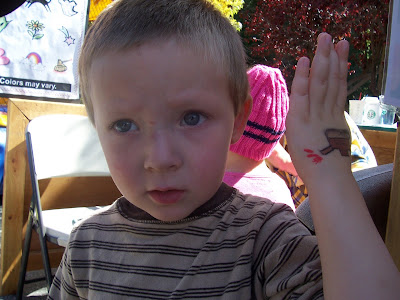 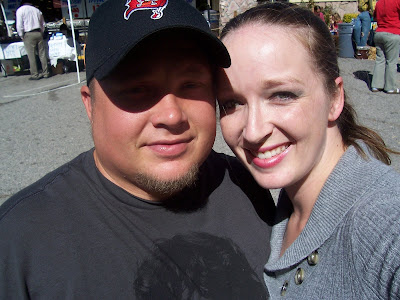 This past weekend Kayla got to meet some of her extended family. Her great Uncle John, great Auntie Hannah and cousin Sonya came all the way from the UK. I was super excited because I hadn't seen them in about 5 years. They are originally from England but they lived in Southern California when I was younger. My aunt is German and worked at a German deli when they lived out here. She was nice enough to bring up the fixings for my favorite sandwich from her deli.
There was a big family get together at my aunt Michelle's house on Saturday. We all got together had food, fun and laughs. I was hoping and praying that Kayla would be healthy enough to go and she was! I am so thankful that she was able to meet them and hang out with family.
They came up on Monday and we went to the village and fed the ducks. Here is a picture of us: 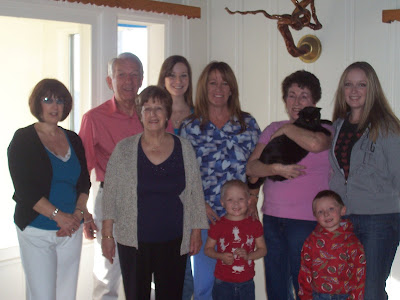 (From left to right) Sonya, Uncle John, Auntie Hannah, Sheree, Mom, Kayla, Grandma Anne with Roo, James and Me.
Posted by Sandra at 11:36 AM 1 comment:

Today Kayla had a doctor appointment for labs, or so I thought. We went in and had to be isolated (again) because Kayla still has a cough. Thank God Jimmy's sister Heidi sent Kayla an ipod with "Horton Hears a Who" on it. There were no movie carts available.
Anyway, they take her blood and send it off to the lab. I always expect that the lab will be running behind and today was no exception. We waited a little over 2 hours for her counts to come back. Before labs came back I talked to the head nurse and asked her if Kayla was going to get chemo. She said that it was only day 7 (Her road map calls for every 10 days) so she probably wouldn't get chemo. Then when her labs came she paged the Dr. to ask if he wanted to give any chemo. Kayla's ANC is 687 which is under the 750 minimum to get chemo. I assumed that she was only going to get Vincrystine since it doesn't really lower counts and is pretty mild compared to other chemo drugs. He called back and said that we would just skip to day 21. The nurse said that she would get chemo today and PEG (a shot in each leg) tomorrow.
The tech comes in and Kayla asks "How many chemos and I getting?"
"Three" she says.
I said "What do you mean there are three?"
"Well one of the is Zofran" (an anti-nausea medicine) says the tech.
"The other ones are Vincrystine and Methotrexate"
My heart dropped out of my butt.
"No, she is only getting Vincrystine" I said.
"It says on the orders that she is getting both" says the tech.
The tech then walks out and asks the nurse if Kayla is supposed to get both. The nurse says yes and walks in the room.
"We are starting day 21 so she is getting the chemos that are listed for day 21" said the nurse.
At this point I was livid. I had been told 4 different things and I wasn't sure what was going on at that point. All I knew was that the ANC killer (aka Methotrexate) was about to be administered to Kayla. I turned away and tears started running down my cheeks.
I am so afraid that we are going to have a repeat of last time when she got sick from the chemo and somehow caught the flu and c-diff.
Then the Dr. came over from the big hospital (he had been doing rounds) and he could tell that I was not happy. He asked me what was wrong and I told him that I wasn't happy about her getting Methotrexate. I told him how afraid I was that her ANC would go to 0 and that she would have to be admitted. He told me "This is what happens with chemo, levels drop and sometimes they have to be admitted."
I said " Well yeah but she has been admitted 14 times."
He didn't have anything to say about that so I moved on to my question.
"Is there anything stronger for her nausea? Last time she had methotrexate she was nauseous and threw up."
He ended up prescribing Zofran in a higher dose.
So far Kayla has only complained of feeling a little dizzy, but besides that she is feeling fine.
Posted by Sandra at 3:53 PM 3 comments:

I decided to look at the news articles that were written when this all started. I was numb when it all happened and I didn't really take it in. I am so deeply touched that these people took the time to write our story and listen to me talk.
I just read one of the articles and it made me feel so loved. I remember the outpouring from our community and all of the kind, selfless things that complete strangers did for my family.
Thank you all so much. I love my community and all of my new friends. It is because of your kindness that I am where I am today.
Thank you to those that braved the snow to make it to the benefit dinner at Borderline. Thank you to those that arranged the pancake breakfast, all of the volunteers and hungry patrons. :)
I really can't thank you enough.

Here is the first newspaper article about us :
here
Posted by Sandra at 12:50 PM No comments:

Kayla had the flu 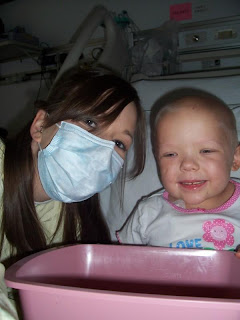 Kayla got out of the hospital last Thursday. I have meant to update but it is hectic around here. She came home taking so many medications and some of them have to be taken 4 times a day. They had her on Tami-flu, even though she didn't have the swine flu. The infectious disease department at the hospital sent the swine flu test twice because they didn't believe the first result that came back. So the whole time she had to be in isolation and we had to wear masks, gowns and gloves the whole time. I don't know about you but wearing a face mask for 8+ hours gets very itchy and irritating. Not to mention my glasses were foggy all day.
She is still struggling with c-diff. She takes her Flagyl 4 times a day but her poop is still not as hard as we would like it to be. I read on the Internet that her chances of having it again are greater now that she has had it. awesome.
I didn't even know until yesterday that she had the flu. They were taking her vitals and asking me about her medications and the nurse says "I see here that she had type A flu while she was in the hospital." I told her that I didn't know that. It would have been so awesome if the hospital staff could have informed me about that. It explains a lot. My poor baby was so so so sick.
Back to yesterday, we had to be in isolation yesterday. I am so glad that they brought a movie cart in. It made the isolation bearable. It took 3 hours for her labs to come back and her ANC was only 259. That's low. Her doctor decided to give her Vincrystine but not methotrexate. I'm glad that she was able to get some chemo but I just hope she doesn't go to 0. It is pretty much a given with Kayla that if she goes to 0 she is going to get admitted for a fever. 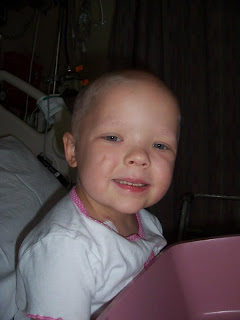 The doctor that was doing rounds when Kayla was there told me that Kayla has been so sensitive to every stage of chemo, which is a good thing because it means that her body is responding. She also said that Kayla has been hospitalized more times than any other kid she has seen. She meant in the ratio of time since diagnosis vs. hospital stays. 10 months since diagnosis - 14 hospital stays.
We go to clinic next Monday to see what her levels are and to see if she can get Methotrexate. Her Dr. said that he is not going to up the dose (which is normal protocol for this road map) he is going to keep her at the one the had her on.
Posted by Sandra at 8:30 AM 2 comments:

You can learn more about ALL HERE